click here for more info about visiting the farm 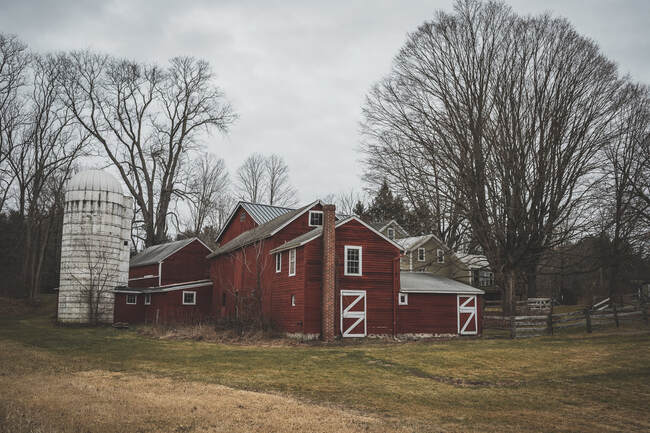 Poverty Farm as we purchased it in January 2020.
Guardians Farm has found its home in the lovely Town of Southbury in the rolling hills of Western Connecticut.  Southbury has a rich farming history and we are excited to be a part of it during a time when many farms are closing.  The farm was built in 1850 and once was comprised of almost 200 acres.
​
The Barn
Originally called Poverty Farm, the large barn shows remnants of its history as a dairy farm decades ago.  One of the entrances to the barn has "1850 PF" stamped in the concrete. Two large hay lofts give a glimpse into the large operation this farm once was. Five large stalls now house our herd of Nigerian Dwarf and Lamancha goats. What was once the dairy parlor is now the home to our kidding stalls which we constructed with lumber from a mill in Harwinton, CT.  With the expansion of our farm including Holsteins and Jersey cows the dairy parlor will be revived in 2021.  The barn's concrete silo overlooks the property and gives the farm that quintessential old New England feel.
shop our market 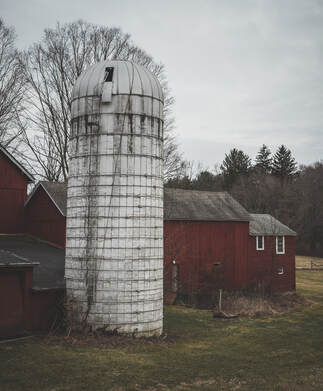 The Property
The concrete silo isn't the only thing overlooking the pasture.  Red Shouldered Hawks, Red tailed Hawks, Barred Owls and several other species of raptors and smaller song birds fill the skies above the property. A small pond is home to several Mallards and attracts several different species of wildlife.  What sounds like thousands of peepers breaks the silence of the night from dusk to dawn.  Whitetail deer cruise the back section of the property and bed down there at night. Coyotes pass through occasionally and if they are lucky they make it through without Annie or Aslan spotting them. 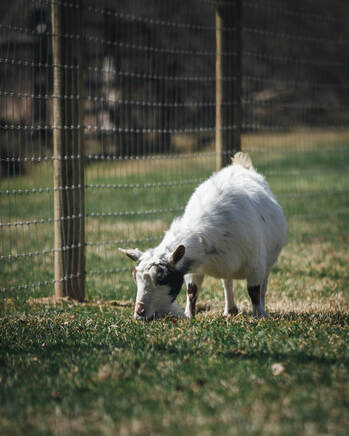 Ivy grazing in the goats paddock
​The majority of the farm's property along Bates Rock Rd consists of several rolling pastures that we rotate our animals throughout to graze in the summer months. The rotation of the animals in the pastures ensures the health and vitality of the vegetation and provides the goats and cows with a very nutritous source of sustainable food.  Decades old split rail fence and field fence line the property and was used to corral the multiple horses that were kept on the property in recent years.  For our goats and cows with the help of our friends from Echo Farm we installed several hundred feet of woven wire fencing on round posts.  The outside of the fencing has an electric wire to prevent the areas predators from making an attempt at entering the paddock.
So who are we
Well we are David and Tamra and we started Guardians Farm back in 2014.  Neither of us were raised on a farm or knew the first thing about farming or livestock but we both had a love for animals.  As a kid Tamra brought home all sorts of animals from small frogs to a horse she found wandering.  David grew up raising various lizards and snakes, worked at a pet shop for a few years in high school, volunteered at Mystic Aquarium and also worked as a Veterinary Technician for several years.
Tamra has been a police officer since 1999 and has been a K-9 handler for most of her career handling two different canine partners. David iss a 22 year veteran of the U.S. Coast Guard, a police officer since 2004 and was also involved with K-9 at his department.
Back in 2014 we started with a few chickens and two small bottle raised goats, Dixie and Savannah.  Eventually we added their mom Serendipity and half sister Namaste to the family.  Serendipity was in milk and we began making yogurt, cheese, lotion and soap.  Over the years since then our herd of goats has grown and so has the rest of the farm and the business. 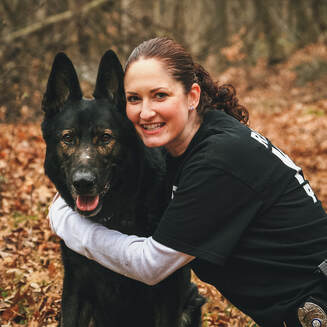 Chase and Tamra
What's in a name
A guardian is a defender, a keeper and a protector. ​ Both of us have full time careers as police officers and are fortunate to both also be K-9 handlers.  We are both currently working our second police canines, but our first partners have left a huge impression.  Tamra's first police dog Chase was a one of a kind dog. Their bond was unbreakable, Chase would've laid down his life for her. In 2013 Chase retired and lived out his life at home with us.  In 2014, shortly after we started farming, Chase passed away.  There is a poem called "Guardians of the night" that talks about the bond between handler and K-9.  We had named our farm Guardians Farm in honor of Chase and David's first police dog Anouke.  Anouke is a caring, yet rough and tough female police dog. From the beginning Anouke was always great around the goats.  Now that she is retired she watches over them during her second career as a farm dog. 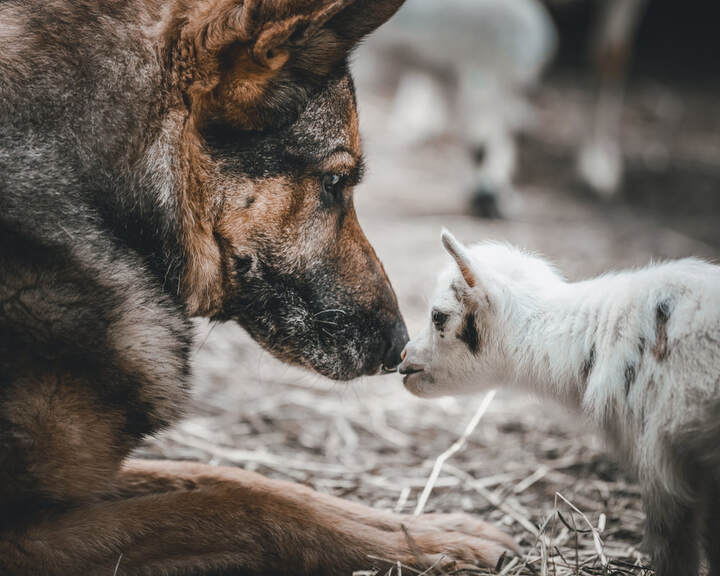 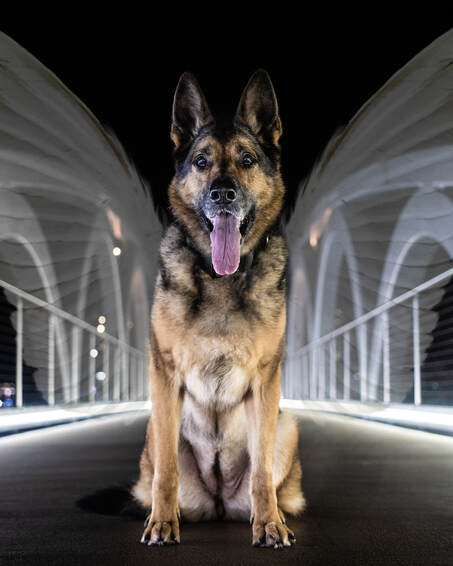 We are deeply saddened to announce the passing of our beloved Anouke.  As most of you know, Anouke was an integral part of Guardians Farm and was loved by those who met her.  We will miss her dearly and know that she will still be protecting the farm as she looks down upon us.
The day after Anouke passed away I looked for my Team K-9 Anouke hoodie but couldn't find it and I wore out the shirt I had. We are starting the Team K-9 Anouke hoodie / t shirt campaign so everyone can memorialize Anouke and help support the farm.  We appreciate everyones love and support that we have been receiving over the past several days.